This is the 3rd blog post from a very special guest blogger: my maternal Grandfather: Clyde W. Kirkman (1915 – 1989). I’m not sure when he wrote this article, however, it refers to the American Heritage Foundation which, according to their web site, was founded in 1973. I think it was probably written in that same year or not long afterwards.

The photo above is from Memorial Day (2007) of my son placing a flag on my Grandfather’s grave.

See my Grandfather’s other 3 articles here:

The Greatest Sale in America
Ladies and gentlemen, I am going to take this opportunity and try to sell you something. This sale is sponsored by the American Heritage Foundation. They want to sell you your American birthright. The right for which multitudes of American men, in times past, have died- died in order to bequeath to you the American ballot – the right to vote. The reason they are trying to sell it is simple. In 1880, 74.5% of the eligible Americans went to the polls and voted, in 1900 it fell to 73.5%, in 1940 it had dropped to 53.5%, in 1948 it dropped to only 51% and has held fairly close to this ridiculous 51% through the 1960 elections.

Some of us just forget and some of us don’t take the time. Some of us don’t care. But I will tell you who will vote: every grafter, every seeker of political favor, every one seeking to get his name on public payrolls, and every one seeking something for himself. However wrong or unfair, these people will vote and see that their friends vote. The latest figures show that this group was responsible for about 10% of the total vote in 1960.

I believe that we should all remember the words of one of the world’s greatest statesman, Edmond Burke, who said: “The only thing necessary for the triumph of a corrupt government is that good men and women do nothing!”.

If you think that one vote won’t make any difference, just remember the election that brought Texas into the union was won by one vote.

So, fellows, let’s buy back our American birthright. Let’s get registered and vote in every election and encourage all our friends to do the same: VOTE! 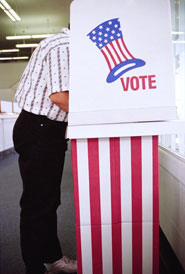