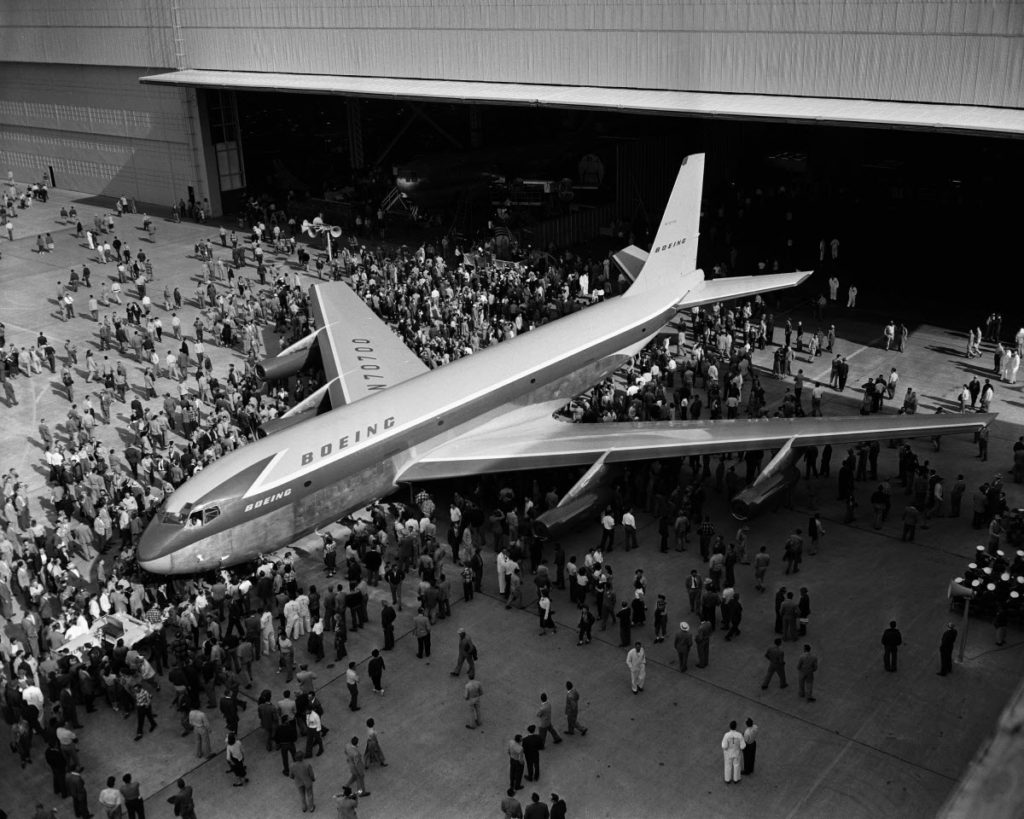 The Boeing Company has been in the news a lot recently with the crash of Ethiopian Airlines Flight 302, a Boeing 737 MAX 8 Jetliner, on Sunday March 10, 2019 killing all on board.  There was also a previous fatal crash of a 737 MAX 8.

Unfortunately when you produce aircraft, cars, busses, boats, etc. accidents will happen from time to time and also unfortunately people will be injured and killed. Hopefully the investigations will not reveal that Boeing has design flaws in its 737 MAX 8 that contributed to, or caused, this crash.

This type of news does not help a company.

But what type of news does help a company? What type of news makes a company stand out and changes the trajectory of their success path forever? What event in Boeing’s history is still being talked about 64 years later?

Let’s go back in time to Boeing’s first commercial jet liner, the 707 DASH 80.

Boeing had taken a huge gamble producing the world’s first jet engine powered commercial aircraft, an aircraft that no airline had requested or ordered.

Wanting to leapfrog the competition and build on its military success with jet powered aircraft, Boeing made the risky decision to design and build a commercial airliner in the absence of any orders. Current commercial air travel at the time was by prop plane and a jet powered plane could cut travel time in half.

Boeing had invested 15 million dollars (1950s dollars) and if no orders came in it would spell financial disaster.

Boeing regularly entertained their customers at the Gold Cup Races on Lake Washington in Seattle, Washington. The Gold Cup Race is a huge boating event that held its first race in 1904: it’s considered the Super Bowl of boat racing.

Airline executives from around the world were in Seattle for an annual meeting as well.

Boeing had promised a fly over of the 707 prototype, the first commercial jetliner. People were excited.

Piloting the DASH 80 for the fly over was Boeing’s chief test pilot Alvin M. “Tex” Johnston. Tex had been testing the 707 DASH 80 and knew what it could do.

Tex piloted the plane over Lake Washington about 300 feet above the crowd AND PERFORMED A BARREL ROLL at almost 500 miles per hour in the first jetliner prototype over 300,000 people! That’s right, he rolled the plane. Tex then turned around and did another roll on the way back!  In the documentary in which I first saw this, there was film of the crown going crazy, but I can’t find that footage on YouTube. There are plenty of clips of Tex talking about it and of the plane rolling, I link to them below.

No one knew he was going to do anything other than a regular flyover: that was all he was supposed to do.

Can you imagine being in that crowd and seeing that massive plane, the first commercial jetliner, doing 2 barrel rolls? It must have been something.

In the interviews of Tex talking about why he did this a few things jump out:

It worked. Tex got everyone’s attention and made a statement that changed the way the world viewed The Boeing Company.

Bill Allen, the Boeing chairman at the time, was furious and called Tex into his office the following Monday and asked him what he was thinking. Tex replied “I was selling airplanes”. After Tex explained that it was a completely safe maneuver, Mr. Allen asked him to not do it again.  Some people say Mr. Allen had planned to fire Tex that morning.

It wasn’t a perfect airplane: Boeing had designed the cabin a little too narrow and had to work hard over the next several years to capitalize on the head start that Tex Johnston had given them with his bold rollover. But they did, and they were very successful.

Anything less than what Tex Johnston did on August 7 of 1955 and The Boeing Company may have had a very different future. They may not be the company we know them as today, 64 years later. No more than a month after the famous barrel roll, Pan Am Airlines ordered 20 707s. Overall, Boeing delivered 1010 707s between 1958 and 1994. The 707 would also be the first jet powered Air Force One.

Hopefully Boeing will survive the two recent crashes of the 737 MAX 8 and if there is a design flaw get it fixed.

Tex, who passed away in 1998, had a sign in his office that said: “One test is worth a thousand opinions”.  Something I stress here a lot is test, test, test, don’t assume you know.

Here are a couple of clips of the event:

So what’s the takeaway from this?